So this happened… Mikuru didn’t fully realise (as she so often doesn’t) what was about to happen.

She was talked into wearing this weird outfit again. Last time she did her and Haruhi ended up spending
most of the day covered in lubricant playing with silicone balls reenacting frog egg laying for
their university biology project. It was fun times. But now Haruhi had brought them to the Halloween
party at Kyon’s new diggs in this outfit. The walk over was embarrassing enough. She had everybody watch Triassic park.
Something to do with “frog” DNA. She was absolutely sure everybody would understand it after her little demonstration.

Well.. Someone was going to understand allright: Mikuru!

p.s. Frog Gigging is a past-time in the “south” of the us. Where the locals go out spearfishing for frogs. In this case however
the spear is a giant dong and the frog is Mikuru. The “Gigging” is going to involve some lube and Mikuru’s nether parts 🙂

This pic was suggested by [prefer to stay anon] for the week of halloween stream pic picks. There will be at least 2 other pictures posted the coming 2 days. With the last one on or just before the 31st. 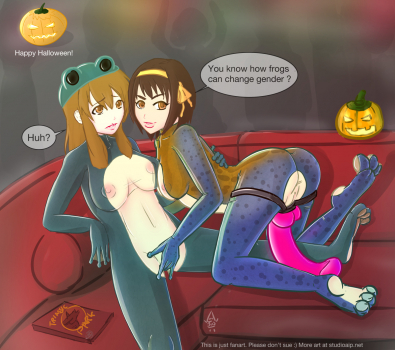 Come follow me on my other profiles I could really use the followers:

And visit my site:
http://www.studioaip.net/